Comedy Entertainer - Norm B. Brings a Fun Workshop or Lecture to your Convention

Lectures and Workshops for your Club or Convention.

He was a columnist for Laughmakers Magazine for 12 years and was the 1998 Laughmaker of the Year.  His ideas and magic tricks have been published in Genii – the Magicians Magazine, The Linking Ring, the Magazine of the International Brotherhood of Magicians. His column of comic magic, bits of business and skit ideas has appeared for over 23 years in Clowning Around – World Clown Association’s Comedy & Clown Publication.  He had a series of columns in M.U.M. The Society of American Magicians Publication. Plus, 14 years of articles in the Fellowship of Christian Magician’s magazine.

He is a Clean Comedian, M.C., Magician and all around Funny Guy.   He’s been a full time entertainer for over 28 years appearing in all 50 states and 6 countries.  He’s toured Hawaii five times, Paul Bunyan Amusement Park for 12 years of special guest appearances, Knott’s Camp Snoopy Amusement Park 12 times, MN State Fair for 2 years of 6 day runs,  and hundreds of Corporate banquets, Schools, colleges and family events.

Norm will share his original magic inventions and comedy routines with you.  Along with it he explains the comic theory and theatrical methods to make the tricks stronger so your audience will enjoy it more..


January 2016 Norm Lectured and entertained at the Hawaii S.A.M. and I.B.M. meeting.  Here is a comment from the S.A.M. President.

"Norm made us laugh until we cried with his unique style of comedy magic while lecturing for our magic club here on the island of Oahu, Hawaii. He is without a doubt one of the hardest working magicians out there and we would love for him to return for another lecture and show! We all had an awesome time! "

"I try to get one thing out of a lecture. Norm's lecture was all back to back stuff I can immediately use in my show. Fantastic material and great, great tips on how to make improvements to my performance. What a fantastic lecture."
Paul Amerson, a professional magician in Texas wrote:

"Thanks for the great lecture, Norm! It was very entertaining with lots of great tips for all magicians. I was very impressed and had a great time." Michael Tallon, San Antonio I.B.M. Secretary


"Norm’s workshop was great. If you work with kids, he is your guy to learn the trade. He is great for adults too. He explains how to make it work." Ray Adams - President, I.B.M. Ring 18 San Antonio, TX

"Norm is good, super duper! He is an inspiration to us here in Singapore when he came 3 years ago for a lecture. When you coming again? We loved his simple and yet powerful comedy magic" Edwin Goh - Singapore IBM Magicians Club

"Your Lecture was really good! It has given me many ideas! Thanks for coming to Singapore to give the lecture!!!" Cynwell Tan - Singapore


"Norm, I've been reading through your lecture notes that I got from you at the Trix In The Stix convention (in England) a couple of weeks ago and I have to say it is fantastic. It's jam packed full of clever, funny, entertaining things for children and family shows. I defy anyone to read through without finding something that can go in their next show. Really well presented too. Top work Norm"  -  Mr. Merlin  - Champion Family Magician - England!


Notes on Norm's Workshops from performers at other conventions and lectures:

"Norm's classes are VERY VERY good. I learned a lot and I like his presentation Thanks Norm for the Comedy Magic!"  - Benjamin the Juggling Clown from the Moscow Circus (35 years in MOSCOW CIRCUS)


"Norm is a very fantastic MC. The many different characters were enjoyed by all. You’re greatest MC I have ever seen."  Uncle Fishy - Comic Entertainer - Edward Leary - Malaysia

"Norm is a wonderful entertainer and educator, and his classes are non-stop manic fun."  Cheryl Schwendel - New Jersey

"A friend and I had the opportunity to go to a Norm Barnhart two day conference in Portland Oregon. Norm taught Improvisation, Comedy Techniques and Comedy Magic. He was very informative and helpful. I learned a lot of techniques and comedy that I will be using in my performances. Norm has a great way of teaching and was very funny."  Randy Cornwell -Portland, OR

"Just been on the Creativity at Sea 2013 cruise where Norm presented his lecture on Creativity and use of Humor. It was a great session and I would recommend Norm to any Magic and other Entertainment clubs who want a different lecture/session from the norm (pun intended). Norm was also part of the group for the week and it was great to learn informally from him and his lovely wife."   Kevin Jones -Creativity At Sea Magic Convention Cruise - Jamaica


“Norm was funny, inspiring and most of all fun. He knocked it out of the park for our Creativity at Sea Cruise. Our attendees loved him and we highly recommend his humor and professionalism.”  - Barry Mitchell - Director

Lecturing at S.A.M.C.O.N. in Boston - Later performed on the evening show.

"Our stars presented great lectures by day and some of our best performances ever by night. An amazingly energetic Norm Barnhart lectured on entertainment geared for the younger crowd. It was a creative, balloon-filled session from a pro worth taking notes from."  -  S.A.M.C.O.N. XI  Reviewed in M.U.M. the Society of American Magician's Magazine.

Norm's New Book will Add Comedy to Your Act 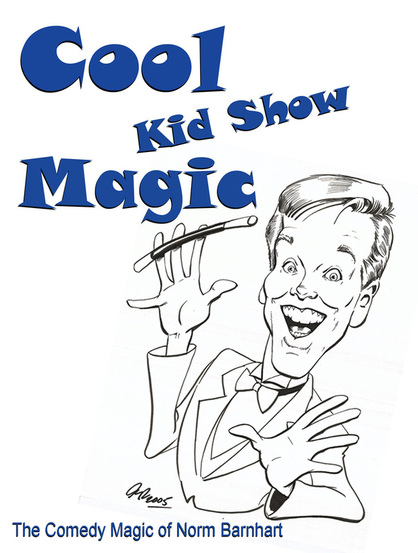 For the past hundred years magic books have raved about being filled with modern 21st Century Magic effects. Well, this book takes you on a journey to new and amazing marvels for the 22nd Century Magician. This is Modern Magic with an entertaining twist.

Comedy Magician and best selling children’s book author, Norm Barnhart has entertained audiences in all 50 states and 6 counties. He has been a full time entertainer for nearly 30 years and has developed many unique presentations that have brought laughter and amazement to audiences of kids, families, schools, libraries, day cares, fairs and festivals. He has comedy tailored for High School, corporate events and even blows away those tough Junior High audiences.

In this unique collection of magic you will discover: Appearing Beanie Bears, Floating Dolls, Cub Scout neckerchief stunts and tricks with mini-donuts!

There are naturally a few card tricks, but these have a twisted twist such as a card shark that finds the selected card and a dinosaur that does a freakish stunt. You will discover unusual birthday card tricks and even a birthday card to balloon.

You will discover Norm’s unusual method to suck helium out of a balloon on a string and cause it to go down, only to then refill the helium with the help of the kids. You will even uncover the elusive secret to make a coffee cup float with Helium Latte Foam!

And of course the 22nd Century Silks    Over 88 unique tricks and original routines! Plus essays on comedy writing and magic.

"Hi Norm. I did your routine Fictional Friction on the ships last cruise. I have got to say it played very good, wallop the sparks flew, and the adults just fell about. Great routine from a great book! Well done Norm."
- Jimmy Carlo - Cruise Ship Magician and Family Entertainer  - England


"I'm using Norm's invisible balloon bit with the thumb tip! It gets gasps from the kids!"
- Gary Dunn – England

"I loved your book! This book is loaded with real working pro material. You can tell Norm works a lot! "
- Ken Scott - Atlanta Professional Magician


"Dear Laugh-Makers friends - I recently got a copy of Norm Barnhart's new book, Cool Kid Show Magic -- it is filled with fun, audience-tested magic. If you don't find at least one or two things to add to your own repertoire, I'd be surprised!"
- Cathy Gibbons - Editor Laugh-Maker's magazine

"Norm, I wanted to congratulate you on your 170 page book Cool Kid Show Magic, it is pure gold! Very informative AND inspiring as well. I especially liked that you have placed valuable articles in between the routines. The photographs added well to the explanations and I enjoyed seeing your snapshots of you in action. The font choice and size make it an easy read and I was taking lots of notes as I read along. Job well done and keep up the great work. Full and part time entertainers really need books like these to inspire them to improve their programs. "
- Steve Kissell - Professional Motivational Speaker, Comedy Entertainer and Convention Planner

"Hey Norm! Thanks so much for sending your book! I love it"
-  John Kimmons, Professional Magician and Ventriloquist - England

"Do yourself a favour and get this book! There are some really excellent ideas here!" - Jeremy Le Poidevin - Practical Magic - England

Read the full review here at the Singapore  I.B.M. website: